News / Genesys gets O’Sullivan on board as Altocloud grows

This article was originally published by independent.ie on the 26th August 2018 by Fearghal O'Connor - See Original Article 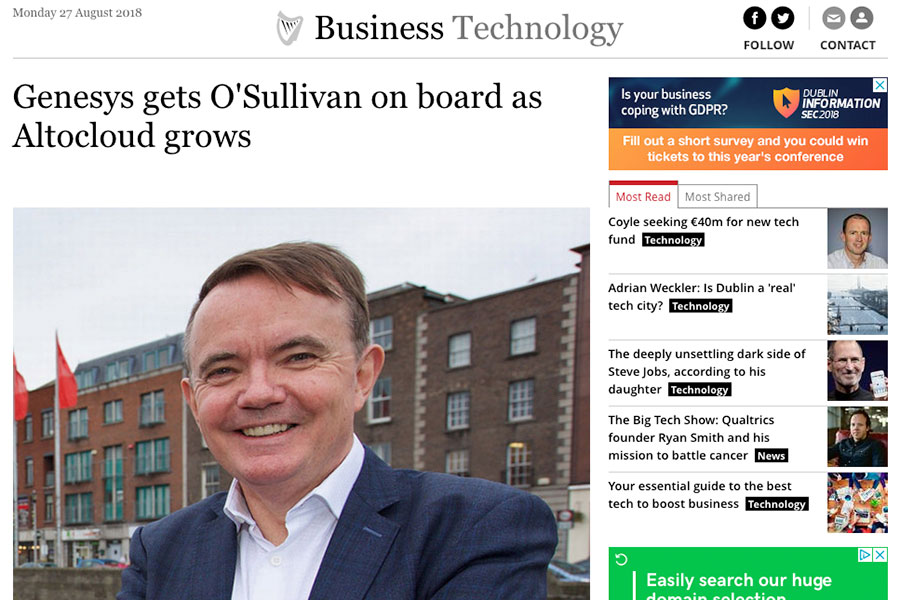 US tech giant Genesys may look at further Irish acquisitions and has already doubled staff numbers at its new Galway operation Altocloud, according to tech entrepreneur Barry O’Sullivan.

The San Francisco-based call centre technology supplier bought Altocloud from the Dragons’ Den star in March. O’Sullivan had originally agreed to stay on part-time to help the two companies integrate, but he has now been appointed to the board of Genesys to assist with its global expansion.

The board appointment to the $1.4bn- a-year company helps further O’Sullivan’s ambition to turn Galway into a global hub for artificial intelligence (AI), he told the Sunday Independent.

“Genesys very much sees Ireland as a strategic source of innovation and talent,” said O’Sullivan, adding that, although he could not discuss specific deals, that there were a lot of “very interesting” companies developing in the Irish AI sector.

“There is a lot of good work going on in Ireland in the areas of data science and artificial intelligence because of the quality of the research centres in the universities,” he said.

Altocloud uses software and machine learning to make it easier for customers and businesses to communicate. Since the Genesys acquisition, Altocloud’s workforce has doubled to 40.

“These are really high-end jobs and it shows that we can get the talent here in Galway. We have lots of openings for more and we are working with the IDA on longer term possibilities.”

O’Sullivan said he could not reveal the details of those discussions in advance of an agreement, but that he expected a big ramp-up in sales of the Altocloud product in 2019 when the integration with Genesys is completed.

“It has been a whirlwind since the acquisition. We have been expanding the team. I had signed up to help with the integration on a part-time basis, but this opportunity to work on the Genesys board is very exciting.”

O’Sullivan, who rose to prominence when he ran a $4bn division of Cisco Systems, is also taking a new role as a senior adviser with private equity company Permira, which owns 50pc of Genesys and has $33bn in committed capital.

“I grew my division in Cisco from about $200m in revenues to $4bn and I am hoping that I can help Genesys to scale to that level of ambition.”

This article was originally published by independent.ie on the 20180826 by Fearghal O'Connor - See Original Article

We use cookies on our website to give you the most relevant experience by remembering your preferences and repeat visits. By clicking “Accept”, you consent to the use of ALL the cookies.
Cookie settingsACCEPT
Manage consent

This website uses cookies to improve your experience while you navigate through the website. Out of these, the cookies that are categorized as necessary are stored on your browser as they are essential for the working of basic functionalities of the website. We also use third-party cookies that help us analyze and understand how you use this website. These cookies will be stored in your browser only with your consent. You also have the option to opt-out of these cookies. But opting out of some of these cookies may affect your browsing experience.
Necessary Always Enabled
Necessary cookies are absolutely essential for the website to function properly. This category only includes cookies that ensures basic functionalities and security features of the website. These cookies do not store any personal information.
Non-necessary
Any cookies that may not be particularly necessary for the website to function and is used specifically to collect user personal data via analytics, ads, other embedded contents are termed as non-necessary cookies. It is mandatory to procure user consent prior to running these cookies on your website.
SAVE & ACCEPT